My daughter picked out this fabric from Girl Charlee online.  There is a brown stripe in the mix here that matches the RTW brown leggings that she has on.  I used Modkid's Bloom Dress pattern I have, minus the "bloom." :)  I added 1/2" to the sleeve length so I had enough to turn the hem under without preparing a separate sleeve binding. 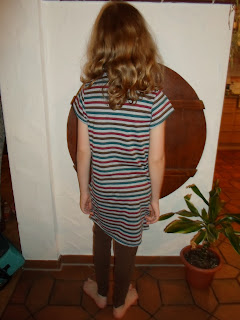 I used the patterns neck binding pattern piece.  After sewing it on, I then turned it to the inside to cover my stitching, making an even narrower neckband which I like!  This is the FIRST time I have attempted using my coverstitch machine to sew a neckband down with.  That made me really nervous!  I had no idea how it would turn out and I really didn't want to have to pick it all out.  Thankfully it worked for me. 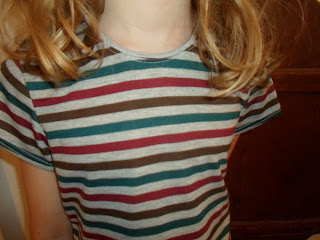 
Posted by Sewing by Shirley at 7:15 AM 4 comments: Links to this post

My daughter has been asking for rainbow pants for months!  Thank you Girl Charlee for getting in some really cool jersey knit fabric!  I didn't work at getting the stripes to line up on these since they are a fun and funky pant.  I used my favorite Crafty Mamas funky pant pattern for these as well.  I have this pattern in the adult size and one of these days I will get around to making myself a pair.

For the shirt, I used Ottobre's Workshop 301 pattern.  I cut a strip of fabric from the pants for the neckband.  I found this really great stitch on my sewing machine to tack down the neckband too.  I cut the neckband at 2 inches and then once it was sewn on, I folded it in half to the inside, covering up the stitches. 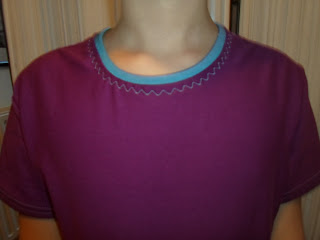 Posted by Sewing by Shirley at 2:42 AM 6 comments: Links to this post