I've been busy making bras for one of my daughters.    She wasn't happy with what the stores had to offer in her size, so I was happy to take on the task of sewing some for her.  So far we have tried both the Watson and Jalie bra patterns.

The one below is the Watson.  I actually make this bra for myself and can make it in just under 2 hours.  This one is made with stretch lace and mesh for lining and I always use powernet for the back band.  My preferred elastic for the neck and arm area for the Watson is piping; it makes such a pretty accent. 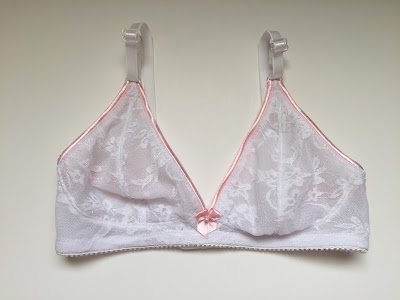 For this next Watson, I used a 1/8 inch poly laminate foam to give it more structure.  I basted the foam in between the lace and the lining before assembling.   My daughter really likes the Watson, but then decided she wanted a bra without seams, which are visible underneath some blouses.  This doesn't bother me since most bras have seams, but I want to try to accommodate her by giving her something that she will be happy with wearing.  I discovered with the addition of the poly laminate foam, I needed to use FOE because of the added thickness of the cups. I would still like to figure out a way to use piping elastic one day.  I thought it was a very pretty bra, but later found out that "beige" is boring. LOL  I need to use fabrics and colors that she likes and not what I prefer. 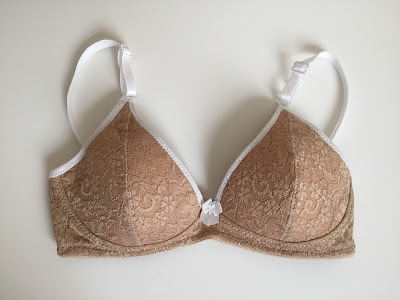 Below is the Jalie 3131.  Jalie actually has a video tutorial online, making this bra extremely easy to make if you are new to bra construction.  I made this bra with jersey knit, a thin stretch lace over the top of the cups, and milliskin fabric for lining.  This one is a win for her.  She said it is very comfortable and no seams!  Also, with the milliskin and jersey knit combined, it was just thick enough on its own without adding any foam. 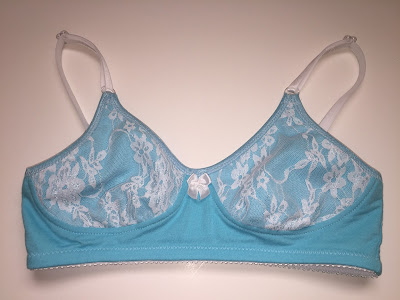 I do like the finished look of this bra.  The cup is gathered at the bottom, but the gathers and the seam are enclosed within the band lining.  FOE is used at the neck and armhole edges. 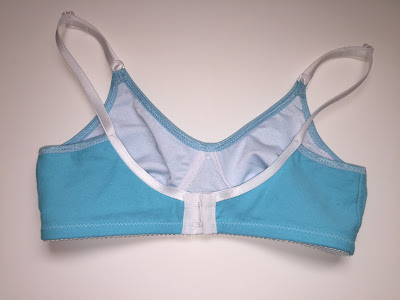 My other daughter prefers store bought and that's fine too!

Thanks for stopping by ~ Shirley

Posted by Sewing by Shirley at 4:32 PM

Thank you so much for visiting my blog! I appreciate you taking the time to comment and share your thoughts! I enjoy connecting with others who share my love and passion for sewing.